When it comes to Chinese traditional festival time, my mum normally would make some special dishes for the family. Some of these dishes include: “Tiger Skin” Kourou (Steamed Pork Belly) , Pine Nut Fish, Red Cooked Carp and this Chinese sticky rice pudding, our family version of the Chinese Eight Treasure Rice Pudding.

The food made from glutinous rice (sticky rice) is very common in Chinese daily eating. But some of them are given special meanings during the festival time (as I mentioned in Chinese New Year Food by Glutinous Rice). For example, the glutinous rice balls indicate “united” and sweetness; the eight treasure sticky rice pudding suggests fortune in the coming new year. 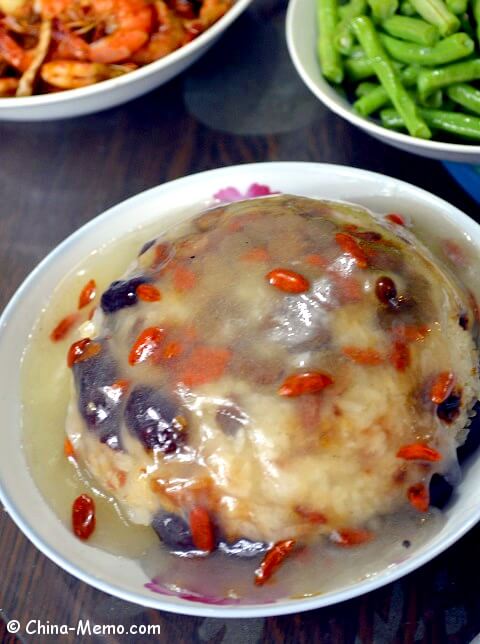 Why eight? Because the number eight is a lucky number for Chinese. The pronunciation of “eight” sounds like the Chinese word 发, Fā, meaning  “grow rich”, richness and wealth. Who doesn’t want to be rich and wealthy? You can see no wonder this dish is popular especially for the festival time.

There are different versions of this dish but the key steps are similar. Basically, cook the glutinous rice in the steamer; mix the rice with sugar and oil; place the candied fruits in the bowl or mold, then put the rice on top of the fruits before putting them back to steam again.

For our family version of glutinous rice pudding we used: red dates, goji berries, raisins and candied fruits. You may use the candied fruits available from your local shop to make this dish. 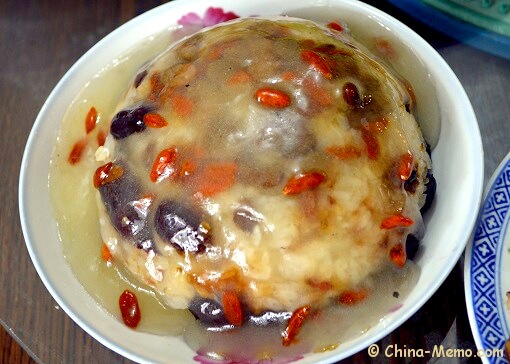 Steps:
•  Wash the rice and soak the rice in water for at least one hour. My mum does it over night.

•  Once soaked, take the rice out and put them into a steamer and steam for about 30 minutes or until the rice is cooked.

•  In a big serving bowl, mix the cooked rice, oil (or lard) and sugar together. (My mum used lard but you can use oil). Use lard or oil to make the rice separated to each other and shining (greased). How much sugar to use depends on your personal preference.

•  Grease the bowl with oil before place any food in it, to avoid the rice and fruits stick to the bowl.

•  Place your chosen “treasures” at the bottom of the bowl. In the final step, once we flip the bowl, these fruits will be shown on top of the rice. To make it nicer, you may place the fruits in a decorative way if you like. For example, sometimes my mum would place the red dates along the edge of the bowl.

•  Add the rice on top of the fruits. Put the bowl in the steamer to steam for about one hour.

•  While steaming, prepare the sauce. Heat up the wok, add about 1/3 cup water, sugar, and cornstarch to mix well. The cornstarch will make the sauce bit sticky. Use sugar to taste. This needs to be prepared when the steaming is almost done, so the sauce will be hot when used later.

•  My mum would soak the rice overnight. She said by doing this, the rice will be fluffy once steamed.

• Do not forget to put oil in the bowl, otherwise, at the end, the rice pudding will stick to the surface and difficult to separate from the bowl.