Usually snack is considered a small eat between meals. But in China, the snack foods can be a very good alternative for meals. Chinese love those food markets as they can sample many small dishes, which is not only value for money but also a nice treat for the stomach too.

In this Olympic park food market, the food stalls don't deal with cash directly, but you can buy a card at the entrance. Each card costs 100RMB and you can get refund if you cannot finish it.

This red fruit is called candied hawthorn, crunchy, sweet and sour, which is a popular traditional Beijing snack. Traditionally it is made by Chinese hawthorn, but now it also uses other fruits such as strawberries and grapes. 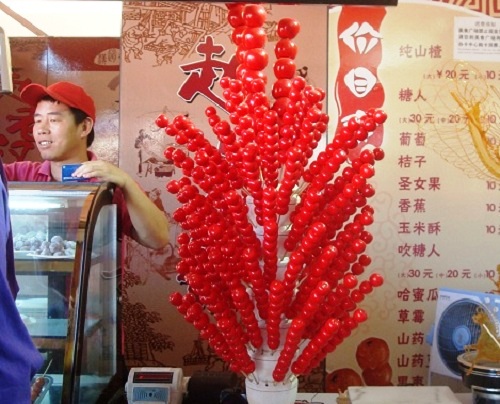 This is another traditional Beijing food named Baodu. Wiki translates it as "Quick-fried tripe". “Bao” is a way of Chinese cooking. “Du” is translated as tripe. But because “tripe” can be also understood as belly, I doubt whether “tripe” is the correct word for “Du”. But one thing I am sure, “Du” is part of the stomach of cattle, not belly. 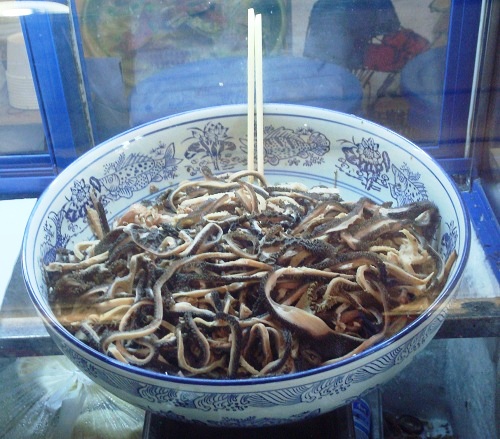 Here is the popular Shanghai snack called Sheng jian bao (pan fried stuffed buns). The buns are first fried for several minutes till the bottom part becomes golden brown. Then they add water and cover the lid till the buns are well cooked. The buns have the crispy pan-fried bottom and are filled with tasty and juicy minced pork inside. 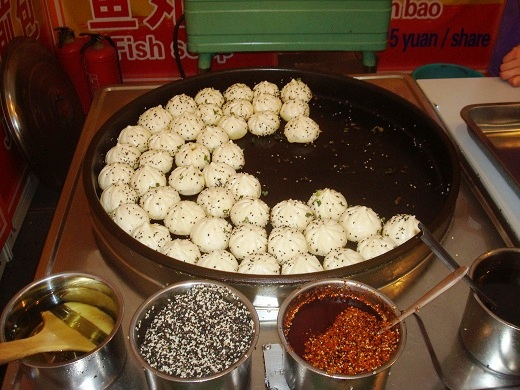 This is something I never saw before, called bamboo tube rice, which is from China Guilin Province. Basically, people cut bamboo into sections then put glutinous rice together with wind-dry meat, peanuts and other ingredients. Afterwards the bamboo is burned on small fire till the rice is cooked. You can imagine that the rice will filled with the fragrance of bamboo. 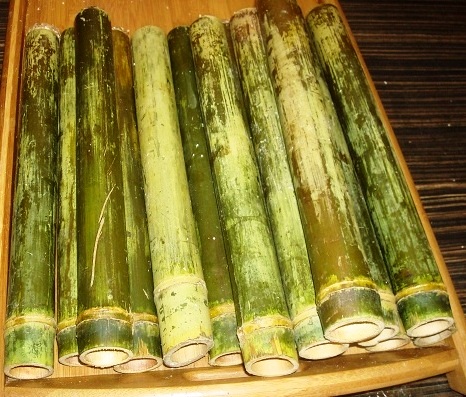 Dim Sum from Guangdong region should be familiar to the people from the western country as they are often seen in the overseas Chinese restaurants, although you might not see exactly the same crystal shrimp dumplings. 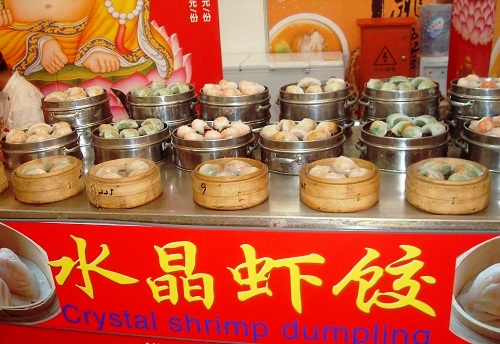 Ok, this is a signature snack from Wuhan, Hubei Province, named Dou pi. The traditional way to make this is to use a big hot pan like this. 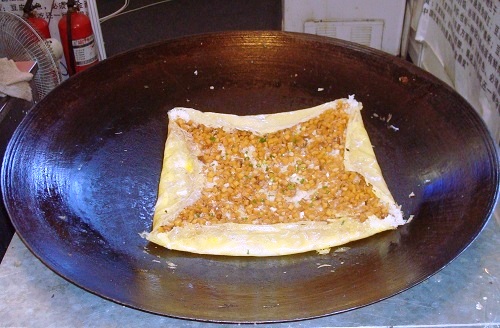 The skin is made by bean flour and eggs, fried to be golden brown. The top is mixed by seasonings, sticky rice, meat and small cubes of bamboo shoot. I think the rice and meat are cooked in advance, therefore only the skin part needs to cook on the day. 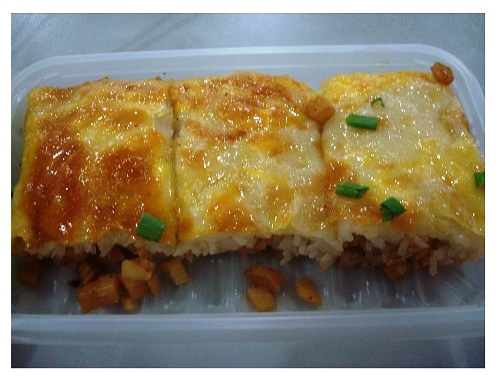 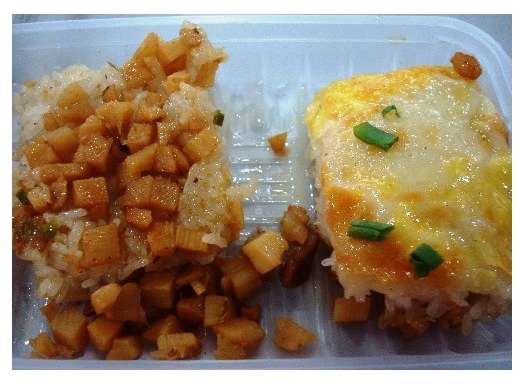 Of course, there are some bizarre foods which you may see from the internet already. To be honest, I don't know when these kind foods become famous and where they originally come from. As a Chinese, I never tried these before. I doubt whether they are just created to attract the tourists?

Fried silkworm chrysalis. About these, I did see them available from the market in north China, and I know people do eat them. Ahhh, just can’t believe it. 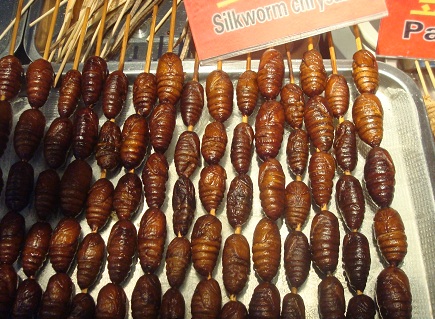 How about fried centipede? scary. 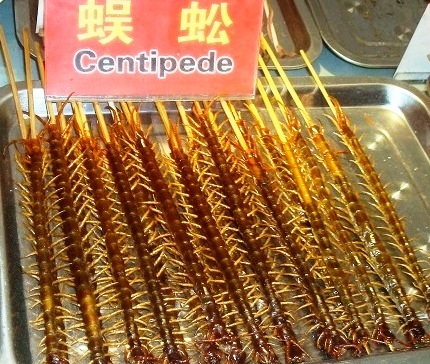 And fried scorpions. Somehow all these remind me a UK’s TV show called “I am a celebrity, get me out of here”, which has a bunch of celebrities to eat insects and bugs in the jungle. But I am sure these definitely have a better taste than what they eat in the jungle. 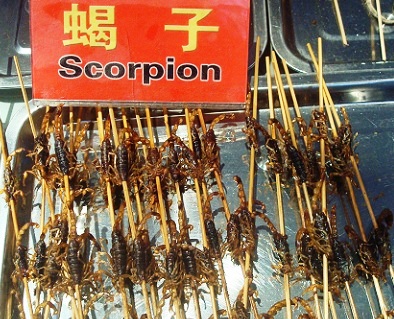 The Beijing Olympic Green food market also offers other Asian snacks such as this Korean fried rice and Japanese takoyaki. 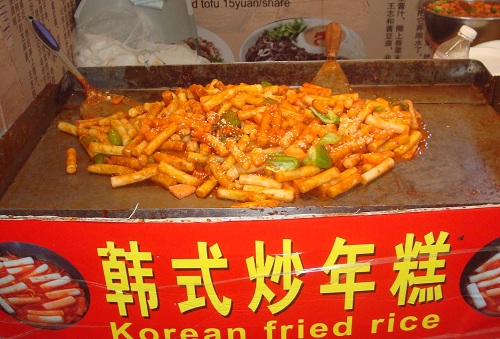 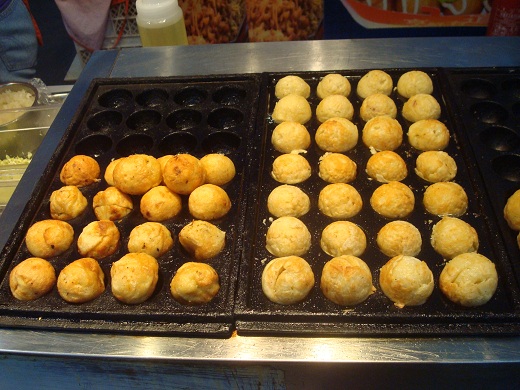 I ended my visit with Japanese snack takoyaki and my favourite Wuhan Doupi, cost RMB30. The price is actually very cheap as each dish normally costs about RMB15, which means you can try about five or six different types of food by a card of RMB100. You will find out that is enough for one person. 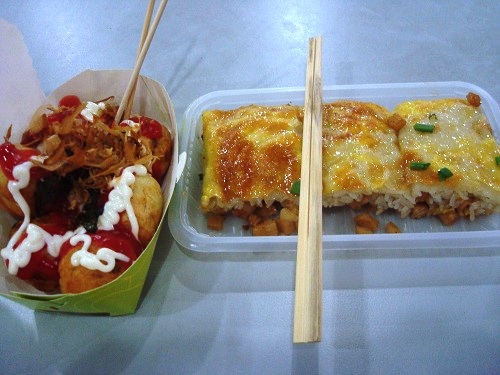 You can find many similar kind of food markets like this one at Beijing Olympic Green. Depending on the environment and decoration, the price may vary, but these famous regional Chinese foods are likely available from every food market.

Here I made a video based on all the photos, you can have a look. Thanks for watching, like and share :)

You may also like Beijing Olympic Green (1) or Beijing Huguosi Snack Bar.